2005 Season Women Soccer: A Look Back 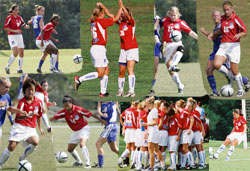 2005 Season Women Soccer: A Look Back

Carrollton, Ga. – November 14, 2005 – It’s always an achievement to make it to a postseason tournament. It’s even bigger when that tournament is in the first year of competition.

While the 2005 campaign is not the first for West Georgia women’s soccer, it was the first season the Braves have played in the Gulf South Conference.

UWG didn’t fare well in the tournament, losing 2-0 to No. 2 nationally UWF, but the consensus opinion is that West Georgia will be a fixture in that tourney for years to come.

The Braves exploded onto the scene in the first weekend of play, blasting Armstrong Atlantic University 4-0 on August 25, 2005. Another explosion happened on that afternoon, as Sara Sohlberg showed what head coach Gareth O’Sullivan saw in her very quickly.

Sohlberg collected her first goal as a Brave in the eighth minute of the game, but before the day was over, the junior had four goals, including three unassisted and UWG was up and running. By the end of the weekend, Sohlberg had five goals and the Braves had outscored AASU and Florida Southern 8-1.

But the joy of the opening weekend turned sour on the following weekend in Columbus, as UWG fell 2-1 to Columbus State and then 4-0 to top-five nationally ranked Tampa. It was a tough welcoming party for new keeper Lauren Camp, but a definite trial-by-fire.

The biggest “next-step” test for West Georgia was to come on the following weekend against regionally ranked Lynn. A win at home would give the Braves a boost in the South Region rankings.

The Braves came through, beating the Fighting Knights 4-2, with Sohlberg blasting three goals in the process. UWG blanked Eckerd 4-0 in the Sunday afternoon contest, leaving a tough weekend with a pair of region wins and a 4-1 record.

The shutout was the second of the season for West Georgia and started a string of four-straight shutout victories for the Braves. Alabama State couldn’t stay with UWG, neither could Shorter. But the biggest win came on September 23, when West Georgia visited O’Sullivan’s former school, Christian Brothers, in the Braves’ first Gulf South match.

Freshman Samantha Jones scored in the 39th minute of the match with CBU and it was all the UWG defense would need, as the Braves first venture in the GSC resulted in a 4-0 win. Sohlberg added a pair of goals to continue her mastery of the competition.

After a win over Harding, though, West Georgia faced it’s first adversity in the GSC with a tie against Central Arkansas in Carrollton. Sohlberg had a goal and an assist, but it wasn’t enough as UCA’s Rachel Anderson scored with 10 minutes left for a 3-3 tie.

Over the next four matches, the Braves would go 2-2, including losing a pair of region matches to Lincoln Memorial and Saint Leo. The second loss hurt the worst, as the Braves were fifth in the South Region heading into the match with SLU. But a 2-1 loss virtually knocked West Georgia out of the running for a spot at the South Regional in the post-season.

But the biggest setback of the season came one week later when hosting Montevallo.

In that match, Laura Walls gave the Braves a commanding 2-0 lead with a pair of goals early in each half. But the Lady Falcons mounted a second-half charge, scoring a pair of goals to force overtime.

In the overtime period, UM defender Adele Jackson’s free-kick found the back of the net to give Montevallo a 3-2 win and put West Georgia in a perilous position for the post-season.

Now West Georgia had no other choice but to win two of their last three matches, with that trio including Delta state, the home finale with West Florida and a make-up game with Ouachita Baptist.

DSU proved to be little trouble, as Donna Evans and Sohlberg had hat tricks in the 9-0 win. West Florida was a different story, entering the game as the third-ranked team in the nation.

In the match, the Lady Argos leaped to a 2-0 lead before West Georgia mounted a comeback effort.

First Sohlberg scored in the 53rd minute, followed by a Brittany Carr score in the 74th minute to tie the contest at two. Just when it looked as if the match would go to overtime, Eventual GSC Co-Player of the Year Cici Marrero’s header off a corner-kick found the net for a 3-2 UWF win.

So it came down to the final game for UWG. The formula was simple; win and head to Pensacola in a week, or lose and turn in the uniforms on Monday.

Ouachita scored in the fifth minute of the contest, but the UWG team effort was too strong as the Braves earned a GSC tourney bid with a 3-1 victory. Sohlberg had a pair of goals and an assist in the game, but it was the defense that was huge for the Braves in the game. The one goal was the only shot given up the entire afternoon.

The win set-up a rematch for West Georgia and West Florida, one that the Lady Argos would not allow to get close. UWF scored a goal in each half and allowed just three second half UWG shots en route to a 2-0 win.

When post-season awards were handed out, Sohlberg became the first UWG woman to earn Conference Player of the Year honors. The junior was second in the nation in scoring, averaging 1.50 goals per game. She was third in the NCAA in points, averaging 3.33 points per game.

In addition, O’Sullivan earned his third GSC Coach of the Year award, his first with West Georgia.