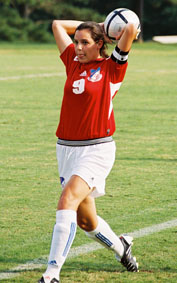 The two teams were fairly evenly matched for the first 20 minutes of the contest, with neither team gaining a decided advantage. But in the 24th minute, Samantha Malone lofted the ball up to Sohlberg, who placed it just past the keeper for a 1-0 UWG lead.

Nine minutes later, Sohlberg struck again to give the Braves a 2-0 advantage headed into halftime.

After the half, things got crazy quick, as Lynn’s Rebecca McCray headed the ball past UWG keeper Lauren Camp to pull within a goal at 2-1 with just 1:51 gone in the second half.

Sohlberg didn’t allow that to stick long, as the junior got loose near the Lynn net, pounding the ball into the upper left corner 38 seconds later to push the Braves’ lead back out to two goals.

Maz Sweeney collected her first goal of the year at the 58:36 mark, giving West Georgia a commanding 4-1 lead with 36 minutes left.

At the 83:57 point, McCray struck again, this time off a free-kick from near mid-field. The ball floated high in the air and just over the hands of Camp to close out the scoring on the day.

Sohlberg’s three goals bring her season total to nine, with all but three of them coming unassisted. The Braves move to 3-2 on the year with Eckerd coming to town on Sunday afternoon.

History: West Georgia visited St. Petersburg last season and came away with a 1-0 loss to the Tritons. The Braves took 10 shots in the match, but couldn’t come away with a goal in 90 minutes.

Last Time Out: The Tritons are 0-4 this year and will be the third straight team from the Sunshine State Conference West Georgia has faced. On the flip side, Eckerd hooked up with West Florida on Sunday, losing a 9-0 battle and then plays Montevallo on Friday afternoon. When the Tritons and Braves lock horns on Sunday afternoon, it will be the third straight Gulf South-Sunshine State Conference battle.

Players to Watch: Eckerd has struggled offensively this season, scoring just one goal thus far . . . #4 Amy Lambert has that distinction.