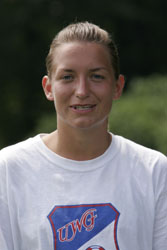 Carrollton, Ga. – August 31, 2005 – The West Georgia Braves have been playing soccer as a Gulf South Conference member for just over a week now, and one Brave has already caught the attention of conference officials. Sara Sohlberg, right, earned GSC East Division Offensive Player of the Week for her play last week.

The junior scored all four goals for the Braves in the season opening win against Armstrong Atlantic last Thursday, then followed that up with a goal against Florida Southern on Saturday.

Her first goal of the year came just 7 minutes and 49 seconds into the campaign. She weaved her way through the AASU defense, blasting a shot past the keeper for an exciting beginning to the season.

Sohlberg and her West Georgia teammates face their toughest challenge thus far in 2005 this weekend, facing #15 Tampa in Columbus on Sunday. Friday evening, the Braves face Columbus State in Columbus.