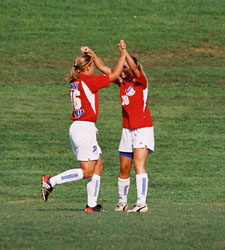 The Braves got things going early in the match, as Sohlberg took a pass from Margret Jonsdottir and streaked down the middle of the field. AASU keeper Tarra Kohler made a great play on Sohlberg’s first blast, but the UWG forward recovered the ball just before it went past the end line. The next shot squirted in-between Kohler’s legs for West Georgia’s first goal of the season.

At the 29:29 point, Jonsdottir and Sohlberg hooked up again, this time on a crossing pattern that found the back of the net for a 2-0 lead heading into halftime.

After the break, Sohlberg again found herself on a breakaway, but was taken down in the box by an AASU defender. Sohlberg pounded the ball into the top left corner for her first hat trick as a Brave and a 3-0 West Georgia lead.

The Braves added one more Sohlberg goal to the total before packing it in for the first win of the season.

Samantha Malone, playing her first game ever in goal, collected the shutout. The junior from Douglasville was put in the net after injuries to the Braves’ first two keepers.

Malone fended off 12 shots from the Pirates on the afternoon, including four shots on goal. The Braves also had 12 shots, with eight shots on goal.

Next up for West Georgia is Florida Southern on Saturday. Kick-off is at 3 p.m., following a match between Armstrong Atlantic and Christian Brothers.