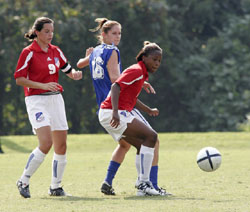 Carrollton, Ga. – September 14, 2005 – It wasn’t the prettiest win in the history of West Georgia soccer, but the Braves took out D-I Alabama State on Wednesday at Observatory Field by a score of 3-0.

The Braves defense was solid on Wednesday, led by players like Stephanie Giles (9) and Samantha Malone (2)

As a team, West Georgia out-shot the Lady Hornets by a 45-1 total, including 13 from forward Maz Sweeney. Sweeney didn’t have much luck in the shots category in the match, scoring just one goal on the day. She hit the post twice and the bar once, just missing a four-goal output.

Alabama State packed the defense in during the first half, keeping at least 10 players on their side of the field for the majority of the period. The Braves mustered 16 shots against the defense, but couldn’t pull a goal out of it. The three best opportunities came from two of Sweeney’s post shots and a break-away from Chelsy Yarbrough.

With time winding down in the first half, Yarbrough got past the ASU defense and was seemingly one-on-one heading to the goal. A smart takedown in the box from behind by Jessica Priest was all that stopped her.

The Braves came out quickly in the second period, as Sweeney broke the tie just two minutes into the half. She took a pass from about 20 yards out and sprinted towards the goal, tapping the ball past the keeper for a 1-0 UWG lead.

Six minutes later, Sweeney hooked up with freshman Brittany Carr, who placed the cross into the back of the net for the second goal of the day. Carr wasn’t finished, scoring the final goal in the 62nd minute, this time unassisted.