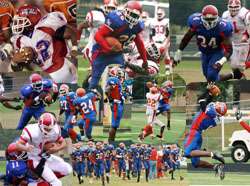 Carrollton, Ga. – November 9, 2005 – The 2005 football season began with high expectations for the West Georgia Braves. After three seasons at the bottom of the league standings, UWG began the year with the goal of becoming a contender for the Gulf South Conference crown.

To that end, the Braves accomplished their goal for 2005. However, with the recently completed 7-4 season behind them, West Georgia’s is still a very hungry football program.

“We took some big steps this season,” said coach Mike Ledford. “We’re happy to have a winning season and to finish with a big win at Valdosta, but we’re a long way from satisfied.”

While the 29-15 win at Valdosta State was the season’s highlight, it was far from the only bright spot in 2005. The Braves finished the year with a record of 7-4, the program’s first winning season since the 2001 campaign. Also, they were 7-2 in GSC play, tied for second and a game behind league champ Central Arkansas.

This represented a dramatic turnaround for a program that won but eight games over the previous three seasons, combined.

At the heart of West Georgia’s turnaround was a defense that ranked among the best ever in the 25-year history of the program. UWG’s stop troops Led the Gulf South Conference in rushing defense, allowing but 77.0 yards per game. Also, the Braves finished second in the GSC in total defense, and third in scoring defense.

Beyond those numbers, West Georgia’s record book will have many new entries on the defensive pages. The 77.0 yards per game rushing shattered the old mark of 107.8, set in 2000. Also, this year’s Braves set new marks for fewest yards per rush (2.3), fewest total rushing yards allowed (847), fewest rushing touchdowns (11), and fewest rushing first downs (64).

UWG’s ability to shut down the rush results in this year’s defense seeing 376 pass attempts, also a new school record. However, opponents averaged only 10.5 yards per completion, the fewest ever surrendered by a Braves defense. Also, allowed only four first downs by penalty, their lowest total ever.

For Ledford and his program, the next step is returning to the top of the league standings and making a return to the NCAA Playoffs for the first time since 2000. Toward that end, the Braves have a solid nucleus returning for 2006, including nine starters from a record-shattering defense.

To fortify that nucleus, UWG coaches are already busy on the recruiting trail. Their goal is to add the pieces to turn a team that knocked on the door this season into a squad that kicks down the door in 2006.